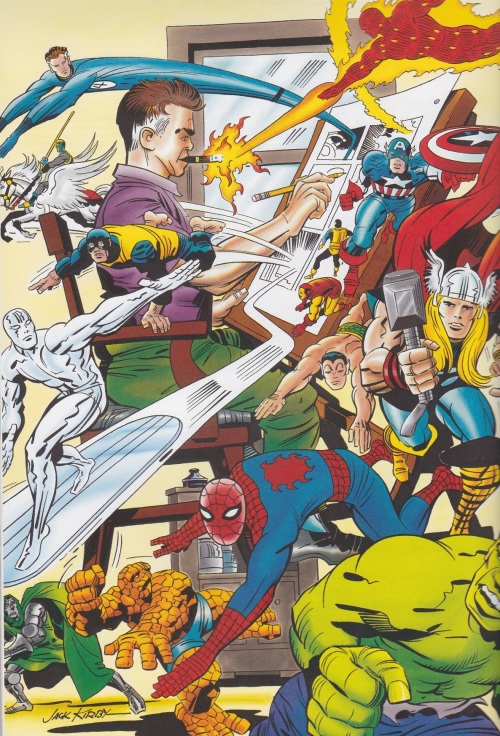 Self portrait of Jack Kirby from Marvelmania International circa 1969. Color done by Tom Ziuko. (Scan taken from Kirby: King of Comics written by Mark Evanier with intro by Neil Gaiman

Jack “The King” Kirby is probably one of the most important people in comics that you may have never really known of (unless you’re really into comics… or you had an awesome Professor who made damn sure you knew about him in Comics & Zines class). There is very good reason that you should know this man’s name. Mr. Kirby helped shape my childhood (Donna: our childhood) and many of you reading this may have also had assistance from him, whether you realize it or not! You see, Jack Kirby helped create some of our most favorite super-heroes and idols, such as Captain America, Fantastic Four, The Hulk, The X-Men, O.M.A.C, The Avengers, Darkseid, bringing Thor and Loki to life in Journey Into Mystery,  Orion, Ant-Man, and the list goes on and on. Unfortunately, Jack Kirby was mistreated, used, and abused by many of the companies that he had worked for during this lifetime. It wouldn’t be until late in his life that he started to get the much needed, much deserved, recognition that he should have had throughout his career.

Last week, November 4th through the 10th, there was an amazing dedication to Mr. Kirby – A one week only “pop-up” museum was set up on Delancey Street, on the lower east side of Manhattan, close to where Mr. Kirby had spent his youth. While this exhibit was small, it was meant to show what could be possible with more funding in order to set up a permanent (or more realistically, a few months) residence. This was an effort to test the waters, drum up some more awareness and interest, and show how an exhibit of this kind could work. Donna and I took a trip there last Tuesday on a nice autumn day. Luckily, we’re a stone’s throw from the city and when we heard about the pop-up happening this week (thanks to Mr. Brian Michael Bendis on Tumblr) we quickly arranged our schedules to get there as soon as possible… Basically we got way too excited, fan-boy/girl’ed in loud voices, and dropped everything in our schedules to make it happen. It was a perfect nerdy date, part history and part art to satisfy both of our respective interests. So we jumped at the opportunity, eager to show our support.

Soon after we arrived at the compact glass storefront we were able to witness a high school class who came on a field trip specifically to see this exhibit. It was fantastic to see their eyes light up as they saw some of their favorite heroes up close and personal. For many this was a chance to see the origins and creative background for these characters and learn about the man behind their favorite superheros. Many took photos and were asking questions about who some of the more unknown characters were. Hopefully curiosity bites them and they went home to look up more of Mr. Kirby’s work.

While we were there we were also able talk to the outstanding Randolph Hoppe, Treasurer of the Jack Kirby Museum. He’s friendly, enthusiastic, and incredibly knowledgeable about Jack Kirby; even chatting with us about some of his works we were not aware of. If you ever meet him in person, give him a handshake and thank him for being one of the people to help spread the word about the King. The organization he is is a part of, The Jack Kirby Museum and Research Center, is an amazing one: with their efforts they not only help to bring together events, exhibits, and conferences, but they work to help scan and amass a digital collection of Jack Kirby’s works in order to archive them (which is becoming more and more important due to the increasing age of some of his pieces). This then allows collectors, researchers, and enthusiasts alike an opportunity to browse a digital archive of high-quality scans. This organization approaches Jack Kirby’s work as any other culturally significant and precious piece of art, much like any drawing or painting in the Metropolitan Museum… as being worthy of preserving and saving so future generations can study and enjoy them. Comic books, and by association the art within them, are sometimes cast aside by mainstream culture and the art world – people just don’t seem to take it seriously (or as seriously). But seeing organizations who make it their mission to preserve and advocate the importance and significance of comic books in our culture always fill me with a great sense of nerd-artist pride. (This overflow of artsy-nerdy feelings has been brought to you by Donna Rock. Thank you.)

We got a chance to scour the entire place and were able to shoot a good number of photos for many of the people who were not able to make it out there that week. So have no fear, because For The Bl0g humbly presents the works of the incredible, the fantastic, the marvelous, the legendary… Jack “The King” Kirby! 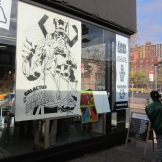 Front of the exhibit; The Prototype Alpha space

A map of the Lower East Side Manhattan; the area Jack grew up in and the area where this exhibit takes place! It’s fascinating to see how Jack lived literally around the block from the exhibit.

Kirby was quite the handsome man.

Census information on Jack’s family and their residence.

In 1983 a man named Richard Kyle had commisioned Jack Kirby to do a autobiograhpical comic about his life as a kid. Jack Kirby would go on to call this short comic “Street Code”.

A Note written by Jack Kirby “The Red Skull has possession of Cosmic Cube… Physically integrates thought waves and matter… he can bring… in being or destroy anything his mind conceives”.

The Jack Kirby Museum has these awesome tablets out for the public. You could skim through some of Jack Kirbys work and read some samples of his comics.

Note written by Jack Kirby at the bottom “Here I come Red Skull- and this time we play for keeps. One of us will die.”

Couldn’t really make out what it says under the lettering. Cool note to Stan Lee on the right. I think Lady Sif’s hand looks fine!

Note written by Jack Kirby at the bottom “Thor is visiting with Sif’s family located in Nordic Levittown called Gunder…yolm. Sif is athlectic and skilled in the military arts. She hefts a javelin ready for throw—Thor admires her grace.

One of my favorite works that I saw at the Jack Kirby Museum!

If memory serves me right, this was supposed to be a kids television show. I would so watch this if Marvel made it a movie. He has tiny buff man arms!

If you liked what you saw, then your going to want to head to the Jack Kirby Museum & Research Center. They are the group responsible for bringing this exhibit to life. They have a magnificent incentive program for donations that could help them continue there amazing work. If you weren’t able to get to the exhibit this week, but enjoyed our pictures and still want to support them and the work they’ve done, consider making a donation on their website!

Also: make sure to check out Kirby4Heroes Campaign on Facebook. The page is run by Jillian Kirby, the granddaughter of Jack Kirby. She regularly makes post about her grandfathers works and recounts tales from her family members about The King.

Filed under Comic Book Reviews, Other

3 responses to “The Jack Kirby Museum”